The Pub and the People

Among the presents I got for my birthday last week was The Pub and the People. It's a study of pubs in a Lancashire town called "Worktown", actually Bolton, carried out in the late 1930's as part of the Mass Observation project.

Boak and Bailey and Ron at Shut Up About Barclay Perkins have both blogged about what a mine of information the book is: having read it, you feel as though you could recreate a 1930's Bolton pub.

Nearly all the draught beer drunk in "Worktown" is mild ale, either dark ordinary or light best (my local brewery Robinson's of Stockport had a light and dark version of their mild until they stopped brewing it earlier this year, and Hydes in Salford still do), and most of it comes from large regional breweries, Magees, Walkers and Threlfalls (my grandmother grew up in a Threlfalls pub in Wigan in the 1920's and in the 1930's worked as a barmaid at another in Stretford, where she met my grandfather, a toolmaker at the Metrovicks engineering factory in nearby Trafford Park).

A couple of surprising things: almost all the men in "Worktown" drink half-pints (women tend to drink bottled beer, mainly Guinness but also pale and brown ale), although both sexes switch to spirits, cider or bottled beer for the highlight of the "Worktown" calendar, the annual, booze-filled trip to the Lancashire seaside resort of Blackpool (where my grandparents spent their honeymoon). One lucky local is hired by the researchers to do an early evening crawl of the pubs in the town centre, getting through eight and half pints in, presumably, seventeen of them by half past nine.

The vault and the taproom are also separate rooms in the pub when I've always thought of them as being the same thing: the main difference seems to be that there's a bar in the first and you can play games in the second.

The pub is the centre of social life, hosting sporting and other clubs, trade union meetings and societies such as the Buffs (the Wigan branch of which met above the pub where my grandmother spent her childhood: she always referred to them, like the book does, as "the poor man's Masons"), as well as illegal, but officially overlooked, activities including gambling and prostitution.

The book also gives an interesting overview of the influence of religion and politics on "Worktown"'s drinking scene, from the fiercely teetotal Nonconformist sects and non-pub going middle-class councillors to the boozy working-class Irish Catholics who run the local Labour Party. 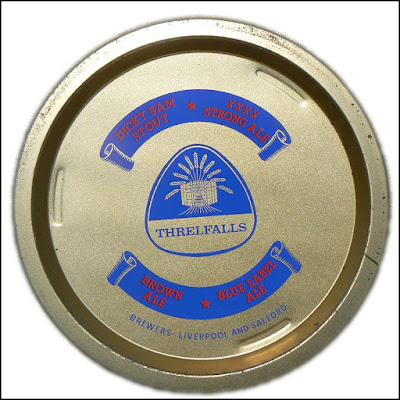