I had a bottle of Schneider Aventinus yesterday.

Schneider must rank as the top wheat beer brewery in Bavaria, if not Germany. Bombed out of their historic home in Munich in 1944, they now brew in Kelheim about seventy miles to the north.

Original, their standard amber, unfiltered wheat beer, is a classic which I've drunk and enjoyed many times. I've only drunk Aventinus once before though. It fizzed like mad and smelt a bit odd. After a couple of mouthfuls, most of it went down the sink. The one I had yesterday couldn't have been more different: perfectly conditioned with a malty taste and the alcohol punch you'd expect from a 8.2 % abv Weizenbock.

With cask or bottle-conditioned beer, one dodgy pint or bottle is enough to put most people off.  I'm glad I persisted with Aventinus. I'll be looking out for it next time I'm in Bavaria. 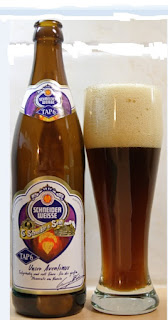