Amid the numerous news reports yesterday about a proposed breakaway European Super League, a money and power grab by the continent's richest clubs redolent of arrogance, greed and contempt for fans and the communities around them, it was good to watch a football story that represents the polar opposite of all that.

Derry City, whose ground stands at the edge of the Catholic Bogside, suspended play in 1972 as the Troubles exploded around it and other teams refused to travel there for away matches. It was resurrected by its fans in 1985, joining the League of Ireland, based in the Republic, whose border abuts the city, rather than the (Northern) Irish Football Association and recruiting local hero Felix Healy as well as international players such as Brazilian Nelson Da Silva, black South African Owen Da Gama and Serbian striker Alexsandar Krstic.

For some reason, the documentary, Different League, eschews surnames, so as well as Felix we get to meet former manager Jim (McLaughlin) and veteran Derry left-wing journalist and civil rights campaigner Eamonn (McCann). There are also cameo appearances for Sven (Göran Eriksson), manager of Benfica when Derry played their first European Cup match against the Portuguese club in 1989, and former IRA commander in the city Martin (McGuinness) who made sure that the match went ahead by tying a rope to a suspected bomb and dropping it down a manhole in the adjoining cemetery, on whose cross-planted slopes impecunious fans had gathered for a free, if somewhat obscured, view of the game. 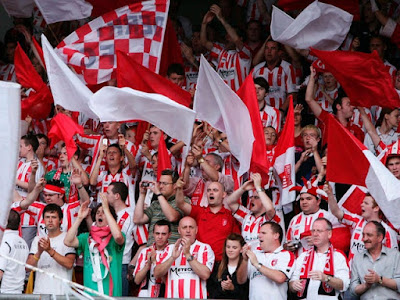