How low can you go?

I watched the TV programme Drinkers Like Me last night, in which sports presenter Adrian Chiles documented his relationship with alcohol. reminiscing about teenage underage drinking in the pubs of his native Black Country before having his current weekly intake monitored by medical staff.

While Chiles described most of his drinking as social, pre-match pints before watching West Bromwich Albion with his mates or bottles of wine at birthday drinks and meals with his friends back in London, he also admitted to using alcohol to relieve the stress, anxiety and depression he has struggled with throughout his career, consuming between 75 and 100 units a week, equivalent to between forty and fifty pints of beer or ten bottles of wine (the Government-recommended limit is fourteen units a week, about six to seven pints of beer or ten small glasses of wine).

I now almost always drink fewer than fourteen units a week, mostly at home, and often little or nothing in the week, unlike in my twenties and thirties when I was a student and then a junior civil servant and socialised in pubs with mates and colleagues: that's largely due to being, as I wrote about here, in an area without a decent pub; if I lived two or three miles to the north or east, where there are several Good Beer Guide entries, I would no doubt be a regular in one of them, although I'd still probably follow the current medical advice of having three of four alcohol-free days a week.

By the end of the programme, Chiles had cut down to around 21 units a week (which was the weekly limit for men until 2016, when it was reduced to 14, the same as for women).  The question that struck me is how sustainable the pub and brewing industry would be if everyone followed his example, let alone the new, lower limit, and also restaurants and supermarkets, much of whose profits come from alcohol sales (there is also a daily alcohol limit of 2-3 units, equivalent to about a  pint and a half of standard-strength beer, or two small glasses of wine). Not very I suspect. 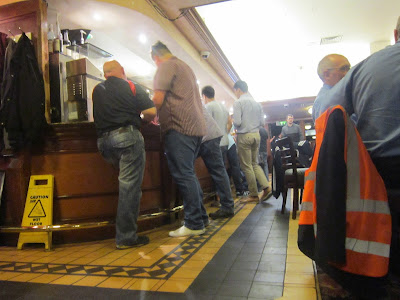