I'm reading Sharpen the Sickle! at the moment, a history of the farm workers' union written by Reg Groves in 1947.

Groves himself is a fascinating character, having been, successively, a Communist, Trotskyist, film critic and perennially unsuccessful left-wing Labour Party Parliamentary candidate, and throughout all those phases, apparently, a Christian socialist associated with the Anglo-Catholic, "High Church" wing of Anglicanism.

Some of the episodes in Sharpen the Sickle!, such as the trial of the Tolpuddle Martyrs, the Dorset agricultural labourers transported to Australia in 1834 for forming a union, and the Burston school strike in 1914, the subject of a BBC drama in the 1980's, are well-known, but the book also outlines how local farmworkers' unions, which were especially strong in the eastern counties of Cambridgeshire, Norfolk, Suffolk and Essex, grew into the National Union of Agricultural and Allied Workers, which in 1982 became a section of the Transport and General Workers' Union (now Unite).

Many of the descriptions of the attempts to organise farmworkers in nineteenth century England — people walking miles through country lanes to attend meetings held by lantern light in fields or the back rooms of pubs —  could be scenes from a Thomas Hardy novel. 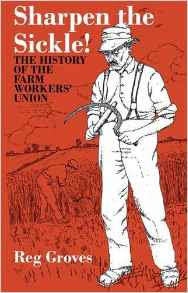