Death in the ring

The death of the twenty-five year old Scottish boxer Mike Towell after a bout in Glasgow last week has re-opened the debate about the safety of professional boxing and whether it should be banned.

Whenever a boxer is killed in the ring, the same arguments are put forward to justify the so-called "fight game".

1. People should be free to do what they want, as long as no else is harmed

If you're a libertarian, there's some logic to this, but it also means having to argue for the legalisation of bare-knuckle boxing and fights outside pubs and football grounds (boxing is one of the exemptions to the legal rule that you can't consent to being assaulted, and if Dale Evans, the boxer who killed Towell, had struck the fatal blow outside the ring he'd now be looking at a manslaughter charge and many years in prison).

It's also not true that no else is harmed by boxing: apart from the fighters killed or maimed in the ring, women are widowed, or left with a paralysed partner for the rest of their life, children orphaned, and ambulance and hospital staff affected by deaths and serious injuries in the ring.

2. There are risks associated with all sports

It's true that people have been killed or seriously injured in other sports - athletes who die from undiagnosed heart defects, rugby players from concussive head impacts or broken spines, jockeys thrown from horses, drivers in motor racing crashes and collisions - but those are accidents, which can be minimised by better safety regulations, not the aim of the activity as it is in professional boxing where winning often means battering your opponent into unconsciousness.

And back in the day, cock-fighting and bear-baiting were very popular too...

4. Boxing keeps kids off the streets and teaches them discipline

If anything, that's an argument for amateur/Olympic boxing with headguards and fewer, shorter rounds, not the more brutal bouts you get in professional boxing.

5. Boxing is a way out of poverty

For kids from deprived backgrounds with few educational or employment opportunities, that might well be true, but is still an indictment of the inequality and lack of social provision in the areas where boxing flourishes.

6. If boxing were banned, it would go underground, and there'd be more deaths in the ring

Undoubtedly true, and the only argument I can think of for opposing a ban and calling for even stricter regulation of professional boxing. 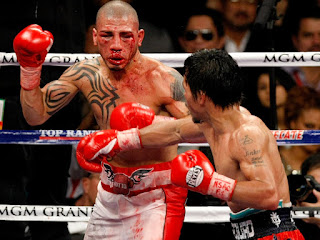