Scotland: that was then, this is now

Two things happened yesterday, the death at 79 of the former Celtic player and manager, and captain of the first British club to win the European Cup, Billy McNeill, and the announcement by the Scottish FA of a rather thin shortlist for a new head coach after the national team's lacklustre start to their Euro 2020 qualifying campaign, that somehow seemed to sum up the state of Scottish football now.

All but one of the so-called Lisbon Lions team which lifted the 1967 European Cup, with a 2-1 win over the favourites Inter Milan, was born within a few miles of the club's home ground, Celtic Park, and while the next generation of top Scottish footballers largely chose to ply their trade in England, with Celtic and other Scottish clubs becoming almost feeder clubs for big clubs south of the border in the 70s and 80s, the national side which they continued to represent was still a force in world football (the former Manchester United midfielder and Scottish international Lou Macari tells the story of how, when they were boarding the plane at Glasgow Airport to fly to Argentina for the 1978 World Cup, a worker there shouted up the steps from the runway that he'd see them back there the next month with the trophy). Now, of course, as in England, players in the Scottish leagues are as likely to come from other countries in Europe, or further afield, than they are the cities which the clubs in them represent.

The football writer Jonathan Wilson has pointed out that if you invent a sport (England and Scotland played the first international football match in 1872) and then export it to the rest of the world, the only way is down, and although I suppose Scotland's decline isn't quite as dramatic as that of two-time World Cup winners Uruguay or inter- and post-war central European powerhouses Austria and Hungary, the current national side and the performance of its league clubs in European competitions still stand in sharp contrast to those that I remember from the 70s and 80s. 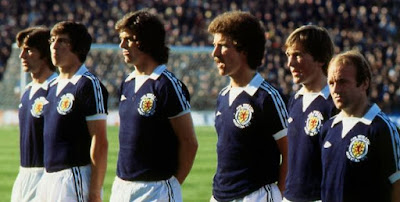