From Humble Petition to Militant Action

Like fellow beer bloggers and CAMRA members Red Nev and Tandleman, I'm a former civil service trade union activist, in my case between 1997, when I joined the Department of Social Security as a casual Admin Assistant, and 2007, when I was made redundant after the local office I worked in closed.

A dozen or so mergers of sectional and grade-based associations in the last century led at the end of it to a single union, PCS, which represents civil servants across Government departments and agencies. I'm reading a history of one of its predecessor unions, the Civil and Public Services Association (CPSA), which I was a member of for just over a year before the final merger which created PCS. From Humble Petition to Militant Action was published in 1978 after the union commissioned the industrial correspondent of The Times Eric Wigham to write a book to mark the 75th anniversary of its formation.

The introduction to the book is a hoot.

"The abrasive character of Association life is probably in part a reaction to the humdrum routine of many of its members' jobs...many of the more energetic young members seek to develop in union work a freedom of expression they cannot find in their daily tasks....Youth is impatient. Association work offers an escape from the restraints and inhibitions of Civil Service life. Conferences and meetings give members an opportunity to let their hair down. Certainly on these occasions they bear little resemblance to the image of tea-drinking, rubber-stamping, buck-passing plodders which seems to be imprinted on the public mind."

Many of the things described in the book, disputed and cancelled elections, General Secretaries refusing to stand down at the end of their terms of office, court cases (the union's HQ in south-west London was famously dubbed "Clapham Injunction"), and arguments about affiliation to the Labour Party, will be familiar to younger union activists, as will the internecine conflicts between Catholic Action and the Communist Party in the 50's and the National Moderate Group, Broad Left, Militant and Redder Tape in the 70's: not for nothing was CPSA known as the Beirut of the labour movement.

I knew that women civil servants had to leave their jobs upon marriage up to 1946, but not that in the 20's the payment they received when they did made them attractive to the few young men who had survived World War I, nor that in the 60's the CPSA magazine Red Tape ran beauty competitions, printing photographs of young women members in its pages ("A motion submitted to the conference expressed disapproval, but got little support"). I also hadn't realised that the head of the Committee on Standards in Public Life between 2004 and 2007, Alistair Graham, is a former CPSA General Secretary. 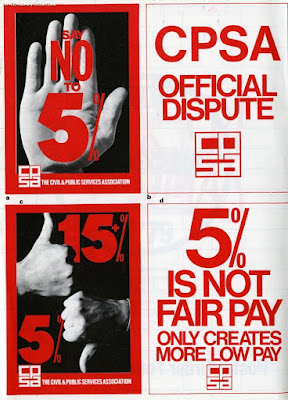